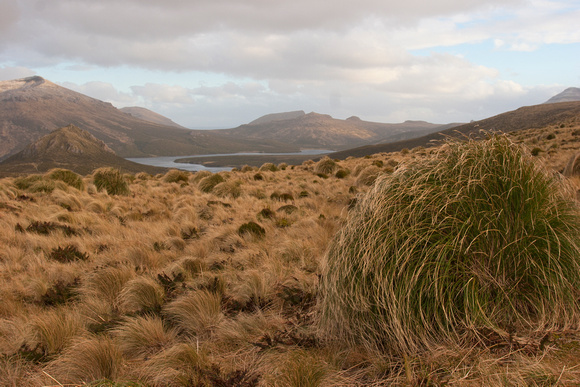 Looking across the grassland tops towards Northeast Harbour on Campbell Island.

Campbell Island is a remote and uninhabited subantarctic island located 700 miles south of New Zealand in the Southern Ocean. Campbell Island covers an area of 11,300ha and is the main island of the Campbell Island group, being surrounded by a number of rocks and islets. It is best known as the home of the albatross, with six species in residence, including the largest albatross: the southern royal. At a latitude of 52 degrees, the climate is consistently cool, cloudy, wet and windy, with an average of only 650 hours of bright sunshine annually and a mean annual temperature of just 6 °C.

Campbell Island was first discovered in 1810 and has a long history of sealing, whaling and farming. In 1954 the island was gazetted as a nature reserve with the following eradications of cattle, feral sheep and finally norway rats nearly 200 years after their introduction. It has been declared pest free since 2003 and the vegetation, invertebrates and birdlife have since been returning. The area is one of five subantarctic island groups designated as a World Heritage Site.
© Ross Curtis
Powered by ZENFOLIO User Agreement
Cancel
Continue