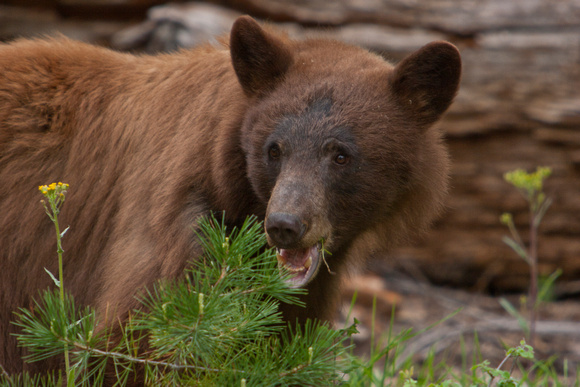 The American black bear (Ursus americanus) is a medium-sized bear common in North America. They are omnivores with their diets varying greatly depending on season and location, generally including; berries, fruits, grasses, nuts, honey, insects, eggs and fish. Young shoots from trees and shrubs during the spring period are important to black bears emerging from hibernation, as they assist in rebuilding muscle and strengthening the skeleton and are often the only digestible foods available at that time.

Despite their name, black bears show a great deal of color variation. Individual coat colors can range from white, blond, cinnamon, various shades of brown to jet black. They often mark trees using their teeth and claws as a form of communication with other bears, a behavior common to many species of bears.

They typically live in largely forested areas but sometimes become attracted to human communities because of the immediate availability of food. In the Yosemite National Park, like so many other areas, the rubbish bins are bear-proofed.
© Ross Curtis
Powered by ZENFOLIO User Agreement
Cancel
Continue