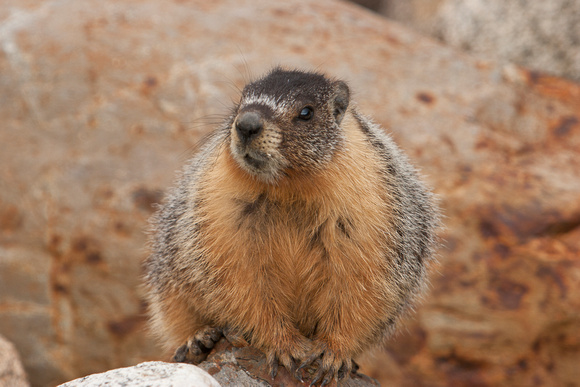 The yellow-bellied marmot (Marmota flaviventris), also known as the rock chuck, lives in the western United States and southwestern Canada, including the Rocky Mountains and the Sierra Nevada. It inhabits steppes, meadows, talus fields and other open habitats, sometimes on the edge of deciduous or coniferous forests, and typically above 2,000 metres in elevation. It is an omnivore, eating grass, leaves, flowers, fruit, grasshoppers, and bird eggs.

Marmots have a "harem-polygynous" mating system in which the male defends two or three mates at the same time, litters averaging three to five offspring per female. They choose to dig burrows under rocks and when a marmot sees a predator, such as a fox, wolves or even humans; it whistles to warn all other marmots in the area before hiding underground.
© Ross Curtis
Powered by ZENFOLIO User Agreement
Cancel
Continue