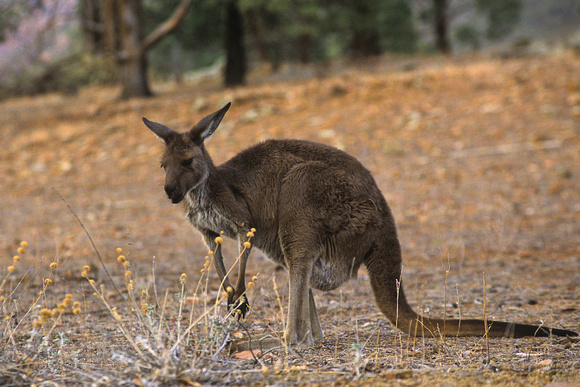 The eastern grey kangaroo (Macropus giganteus) is easy to recognise: its soft grey coat is distinctive, and it is usually found in moister, more fertile areas than the red kangaroo. It is the most commonly seen kangaroo in Australia, due to its adaptability and strong populations.

It prefers open grassland with areas of bush for daytime shelter and mainly inhabits coastal areas, woodlands, sub-tropical forests, mountain forests, and inland scrubby areas. Like all kangaroos, it is mainly nocturnal and crepuscular, being most active early in the morning or evenings.
© Ross Curtis
Powered by ZENFOLIO User Agreement
Cancel
Continue