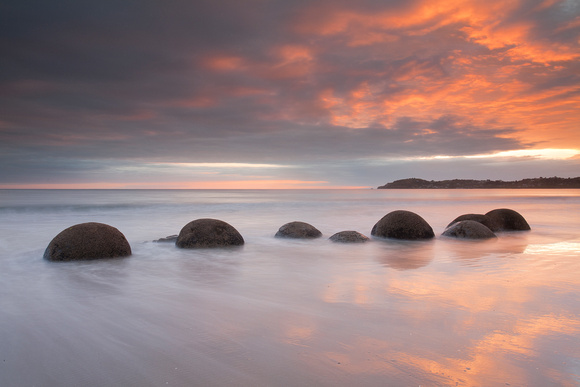 The Moeraki Boulders are huge spherical stones that are scattered over a sandy beach near the small settlement of Moeraki. These boulders are classed as septarian concretions, and were formed in ancient sea floor sediments by a process similar to the formation of oyster pearls, where layers of material cover a central nucleus or core. For the boulders, it was a fossil shell, bone fragment, or piece of wood. Lime minerals in the sea accumulated on this core over time, and the concretion grew into perfectly spherical shapes up to three metres in diameter. Scientists have found that the central core of similar boulders found off the North Island contained perfectly preserved skeletons of turtles, sea snails and extinct reptiles, such as plesiosaurs.

Local Māori legends explained the boulders as the remains of eel baskets, calabashes, and kumara washed ashore from the wreck of an Arai-te-uru, a large sailing canoe. This legend tells of the rocky shoals that extend seaward from Shag Point as being the petrified hull of this wreck and a nearby rocky promontory as being the body of the canoe's captain.
© Ross Curtis
Powered by ZENFOLIO User Agreement
Cancel
Continue